Competition in the backyard. Employees of the port company ECT looking for competitiveness

2011 – After 45 years ECT (the container terminal in the  port of Rotterdam, the Netherlands) got competitors in their backyard, on the Maasvlakte. These new companies will work with the latest technology there. However, ECT has 45 years of experience. How do they ensure that they can use their experience, knowledge and skills in order to let stay  ECT the ‘face’ of  the port of Rotterdam? The employees of ECT are looking for their competitiveness. They started with workplace innovation as were it a journey and a contest: ECT did this by participating in the NCSI (the Dutch National Institute for Social Innovation) event ‘Destination Innovation’. ECT participated under the theme “Employee of the future".  At the event they formulated their ambition and the approach to realize it.

Goal
The aim of ECT is  ‘to make the difference internally by exploiting the knowledge, experience and talents of the department, in order to let ECT stay the ‘face’ of the Rotterdam port’. The team of ECT participating in the NCSI event consisted  of seven persons: two members of the works council, the supervisor of the department Gate & Administration Desk (G&AD) and four of its employees. The goal was written on a large sheet of paper and  around it numerous post-its were stuck with concrete ideas how to achieve this goal. For example “advertise our department”,  “a new, catchy department name”, “provide a pleasant working environment”  and  “let employees participate in the development of IT applications”.

Approach
After an ordering of these ideas three themes were selected that could  be worked out by groups of employees: 1) moving along with the changing workload , 2) connecting “islands" in the department and 3) a transition from data entry to data monitoring. In this way, ECT would  be able to both use his experience and talents and improve his operational processes. This would be innovative for ECT and good for the motivation of the employees.
Then the team was divided  into three groups, to elaborate on the themes. One of the  groups concentrated on connecting the “islands". It was suggested that people could be made more versatile in such a way that they could do multiple modalities. Then the workload would be better distributed. A critical member of the Works Council asked  what impact this would have on  the number of jobs. ‘No impact’  was the answer,  the Works Council will monitor the preservation of jobs.
When the entire team came together again, practical issues were discussed. It was decided that they would bring today ’s ideas in the next work meeting. To prevent that management would do nothing with them it was decided to start themselves. “We need  a clear roadmap so we can show what we are going to do and what we have achieved."

“Think big , start small"
The afternoon program of Destination Innovation provided opportunities to meet experts and talk about best practices. The ECT team met with Marc Maes, who works on innovation management at Deloitte. Deloitte has started a separate department for innovation, because “if you want to make the difference in operations, then you don’t succeed  as innovative department. You have to operate more widely."  he says. A team member stated that in the past at ECT projects were planned at a too large scale and therefore failed. Maes mentioned  two success factors for innovation:  the top of the company must support the project and projects must start small: “Think big , start small and push through quickly, once you have success."
On the second stop of the ECT team they heard  the same message of Ton de Korte, director NCSI: management must find innovation important. That seems to be secured at ECT: the top of the company sees workplace  innovation as an important tool to strengthen competitiveness. Furthermore the new manager of their division supports the project. “A disaster might be another driver for the start of successful innovation”, says De Korte.” That also concerns ECT, namely the rise of competition on the second Maasvlakte. Responding on the question of the team how to anchor the proposed project in the regular operation De Korte said: “You appeal on peoples craftsmanship, so it’s right to start working groups. But take care that it is on the agenda of the weekly meeting with management, so that it becomes an integral part of the operation."
Fredy Peltzer, on behalf of FNV-Bondgenoten (the trade union in the private industrial sectors), stressed the importance of cooperation, especially in the port: “make arrangements with employees, line management and the unions and state priorities”. The ECT team already began to do that, as evidenced by the involvement of two members of the works council in the ECT team.

The pitch
At the end of the afternoon of the event it was time to wipe up all gained insights and present them to a jury in the form of a ‘pitch’.  After a day full of making plans and receiving inspiration, it was not easy to put  the chosen goal and the method in a catchy pitch. Participation in this event has been a learning process for the whole team. They had to get used to brainstorming sessions; for example some team members directly jumped into practical solutions. ECT did not win an award. The pitchers were disappointed, but have a new experience since they never did such a pitch before. The experience they gained at the event Destination Innovation is very important. Moreover, they see Destination Innovation as a good start of their project. In about six months it will be clear what the progression is with workplace innovation at ECT.

Sources
Read the full article in number 1/2 of the Gids voor Personeelsmanagement (the journal: Guide for HRM)  through www.gidsonline.nl. 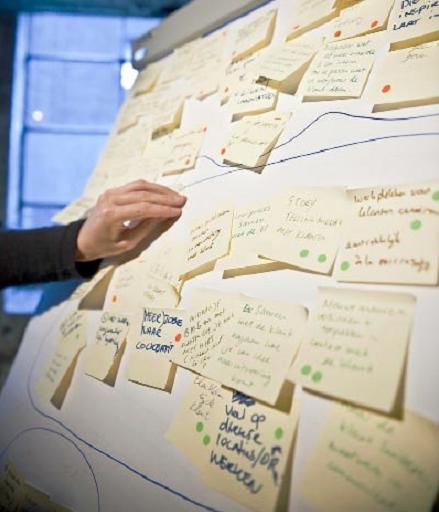